In our Developer Blog Updates we’ll talk about some of the work we’ve completed in the previous two weeks and explain our approaches. Through this you’ll get an understanding of our game development methods and tidbits on the features we’re planning for Dredge! We’re a bit late on posting this one, but better late than never!

Last tweaks and trims and a bit of a “marketing” push this sprint; by that we mean get our Steam Page up and a trailer of some description for Dredge! It’s a hard balance between making the game and making game marketing assets because it’s pretty much one or the other.

We thought he was maybe too aggressive, he’ll only attack, at most, twice per evening… at the start of the game in any case.

Paint out the fog from other Marrow destinations

Little Marrow, the mysterious Outcast Island and Steel Point were shrouded in fog in the evening, now you can see the destinations a bit better in the evening 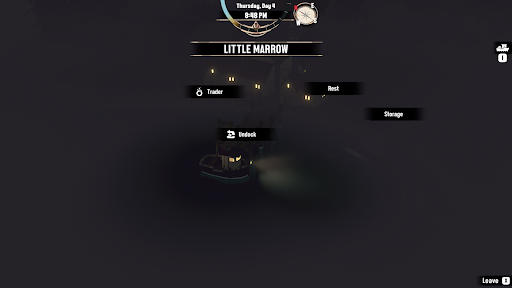 Used to be a tap, if you’ve ever listened to a boat owner before though you know some of these pieces of equipment cost a lot — now a little harder to accidentally sell it to a vendor.

Debug text off by default

We have a handy little FPS and Memory counter for testing purposes, we’ve switched those off by default though so they’re not distracting for players of our demo.

An exciting new way to fish up creepy crawlies from the deep, smaller pots will grab you your basic bitch crab or a slightly bigger one. Bigger crab pots though can bring up giant 10-legged crustaceans from the abyssal depths. Enjoy dev art courtesy of google image search (it won’t be around for long!): 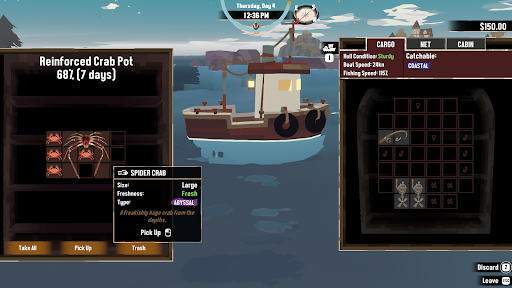 Joel can’t stop himself from giving us fishing options! Can’t be bothered to manually reel up each individual fish? Attach a trawl net and enjoy a day sailing around the ocean, accumulating fish as you go. Don’t forget about it completely though, if that net wears out you’re going to lose your whole day’s catch!

Icons now give you clue and information about whether an item is of interest, and who might be interested in it.

Hull spaces, equipment slots, upgradables… this is now all mapped out. Four versions of boats will be available in Dredge, each with different configurations for speed, flexibility, and fishing prowess.

Dredge supports controller input and while with a mouse you’re either full-throttle or not moving, there’s a bit more nuance with a controller input. Because time passes in Dredge when you move it makes sense for it to pass based on how fast the player is moving.

With NZGDC and our showcase of Dredge on the horizon, plus our publisher demo being sent out, we wanted to have our Steam page up incase anyone wanted to follow add it to their wishlist. Hint.

If you’re looking for a good rundown on how to make the most of your Steam page as an Indie Dev, check out Chris Zukowski’s free online course.

As always we wish we had more time with it, but this 50 seconds alone took us a few days! Still we now have cinematic camera’s set up and have played around with lots of angles which will hopefully make future trailers a lot more straight forward to shoot… I hope.

Check out our trailer on our Steam Page or Youtube.

We also wanted to see what was involved in the integration of Steam with your game, so you can run it via Steam’s client as well (and start racking up those playhours! Yes!)