Does prescribing your player character’s personality restrict your audience?

“Is your character likable?” – This was a question that pulled us up short. We were looking for advice on our vision for the story and narrative from an expert and had the opportunity to talk to David Brechin-Smith from Te Wuruhi Lean Dog, an award winning New Zealand scriptwriter.

We had an overarching idea of the experience we wanted to present and the characters that would help us create that but, while it might seem like common sense for most writers, we never really stopped to understand who Morgan, our main character, was. We knew why he was in the situation he was in, and what he had to do, but hadn’t expressed who he really was which, let’s face it, kind’ve defines why he’s in the situation, why he will do what he needs to do and a bit of how he is going to go about doing it.

Then in some playtests people gave us feedback on the difference to them of being presented with a character vs one they could craft themselves. This opened up an interesting area of exploration for me; does prescribing your main player character restrict your audience?

The gut reaction is; surely yes. But why? Reflecting on my own gaming experience, from early on I’ve pretty much exclusively played female characters and eschewed, consciously or not, games with a male protagonist. Even in games where I was punished for playing as a female character (it doesn’t happen so much any more but games where females couldn’t roll as high str, dex and con and playing a fighting character for example) I would hamstring myself to play something that I felt was more reflective of me as a player. 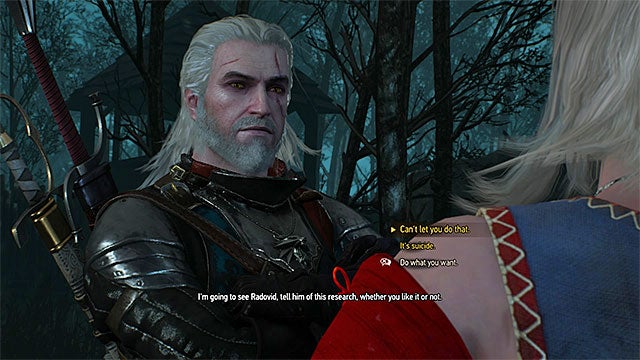 There is one male-protagonist game that I absolutely adore though and that is The Witcher 3. Not to get into an argument about what constitutes a true RPG, hopefully we can all agree that whatever the definition The Witcher fulfills it; you determine the skills and stats of your character and the choices you make have a direct impact on the story outcome, not to mention the outcome of your fights and encounters.

So why did I love The Witcher 3 even though I play as very-much-a-guy Geralt in it? 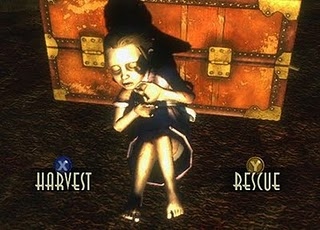 Bioshock’s choice of harvesting or rescuing Little Sister’s is a common example of accommodating player choice.

My theory is that I was able to project so much of my own personality/the persona I wanted to play as onto Geralt through all of the choices I was presented with and that satisfied (wholly) my desire to be the protagonist of a fantastic story/adventure where I’m awesome and a badass. There’s so much nuance in his grunts.

But, if I’m more confined in my ability to realise my chosen personality through the character choices, like in World of Warcraft, then something more basically reflective of me the player (in this case gender) is an easy go-to that allows me to enjoy the game. If I cannot identify with much in the protagonist that’s going to be a pass from me.

Just to add a disclaimer here: I am in no way saying that having a male protagonist excludes females from wanting to play your game, I accept I’m an extreme case and many women enjoy playing as males (some even prefer it!), it’s just that very obvious trait of mine helped me realise how much the ability to have agency over the player character personality impacts my engagement.

This ability to reflect your disposition, values and how you react to the social world (your “habitus” as it’s known in sociology) is why localising games into other languages might not be enough and culturalisation might be needed… but that’s a blog post for another day.

Jumping back to Morgan, our main character in Dredge and the question we were presented with (“is he likable?”), we had an answer for that even though we hadn’t stopped to consciously think about it before. Knowing we had an answer meant that, if we wanted our players to come to the same conclusion we had, our game would fall more on the more prescriptive end of the player character scale and likely wouldn’t appeal to all gamers. 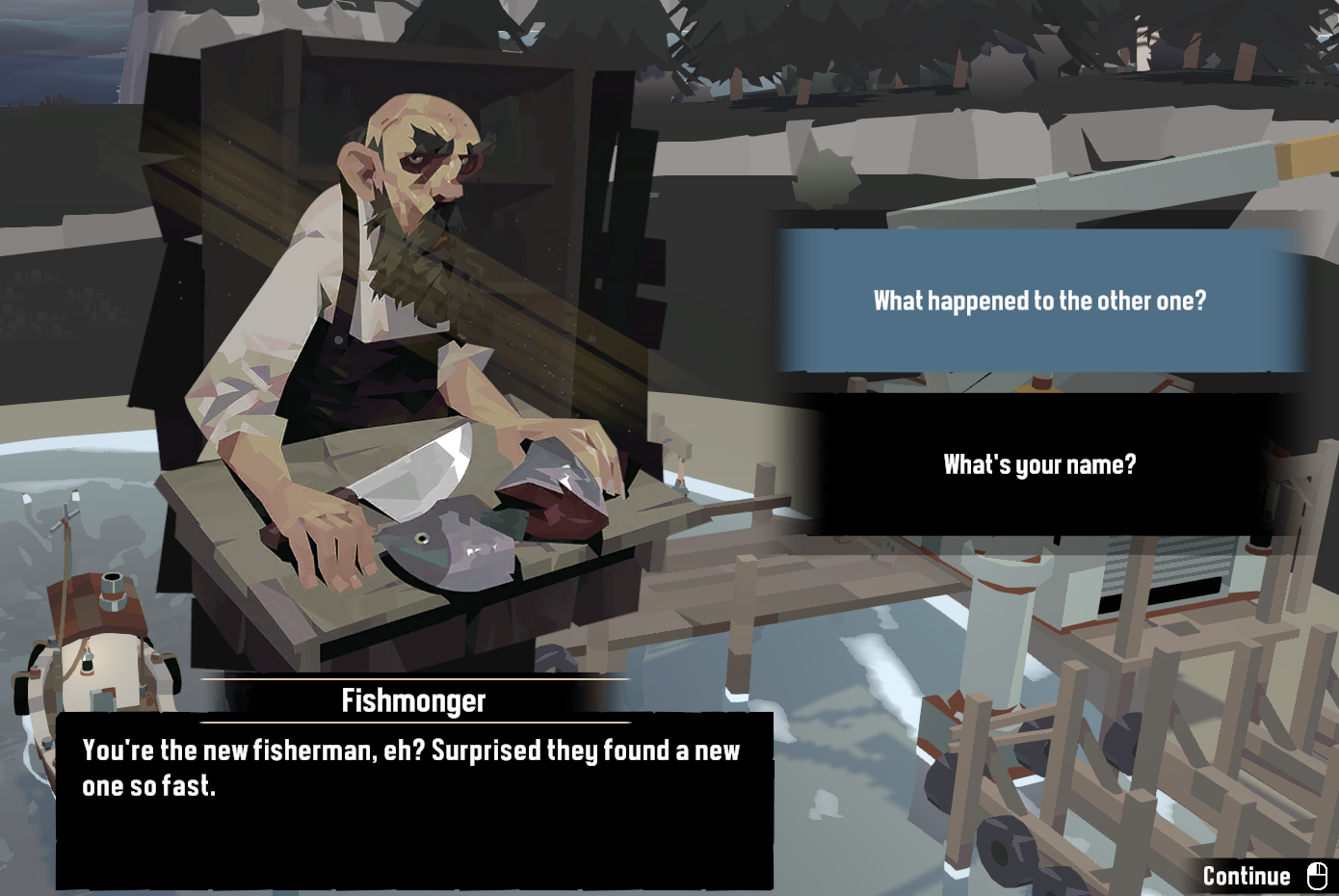 In Dredge there are a few ways to respond to other characters and choices for players to make.

Luckily for us this isn’t a surprise — as a 3-person team with a deadline in mind we’ve been pretty realistic about who we were building the game for and who we weren’t. However this bit of reflection did give me a deeper appreciation for player habitus expressed through the player character, and we obviously want to create as satisfying an experience as possible for our intended Dredge audience.

To achieve that we’d ideally allow players to inject a bit of their own persona into the character of Morgan. Joel already understood the importance of this and when writing the dialogue for Dredge included different ways for the player to respond to other characters and quests that begin or end based on player decisions. However all of those potential responses still have to fit into the bigger picture of who Morgan is. Some may play him more sarcastically than others, some a bit more selfishly or even cruelly, but none of the dialogue or actions taken can be out of character for Morgan or else our entire story falls down.

Something else we’ve appreciated is that another indie has gone before us in trying to solve this problem and made it easier for those who followed; using a tool like Yarn Spinner makes implementing and handling branching dialog a lot more straightforward.

We already had our target demographic when greenlighting Dredge and that hasn’t changed, if anything we have grown more confident that that’s the correct audience. Hopefully we’ve allowed those players to inject a bit of their own personality into our protagonist and play this fishing adventure the way they choose to play.

Hei konā mai, and for those of you interested in the answer to the question we were posed by David I’ll leave you with this quote from Claire Messud, author of The Woman Upstairs:

“The relevant question isn’t ‘is this a potential friend for me?’ but ‘is this character alive?’ What really makes fictional characters worth reading isn’t likability, exactly, but complexity, richness and the intangible charisma that keeps readers invested in their story… It’s the flaws, ranging from minor foibles to horrible secrets, that add spice to the reading and raise the stakes of the narrative.”