With everything coming together this sprint was to address some gameplay flow and communication challenges we had identified during previous playtests and add in some more content in preparation for our first gameplay tests planned for Sprint 8!

Alex has created some new Islands to populate our starting area of The Marrows. It’s starting to fill up!

Sometimes you have to design around your own designs! In Dredge you can lose items from your hull if you take damage to that space, which means the uncareful and unlucky player could lose quest items. We have to be careful not to block player progression though so we’ve made it so some special items, relics, will respawn back in their starting location if they’re lost in the depths. Others, however, are gone for good – and the quest system needs to respect that outcome too.

Dredge equipment has its own hidden inventory slot

As with the above, one of the interesting challenges we had was around whether Dredging equipment would be classed as the same type of equipment as rods and eventually things like trawler nets. We’ve decided that Dredging equipment is unique in that once you unlock it it will always be a part of your boat, allowing players to Dredge and Fish without having to go back to town to swap equipment over. 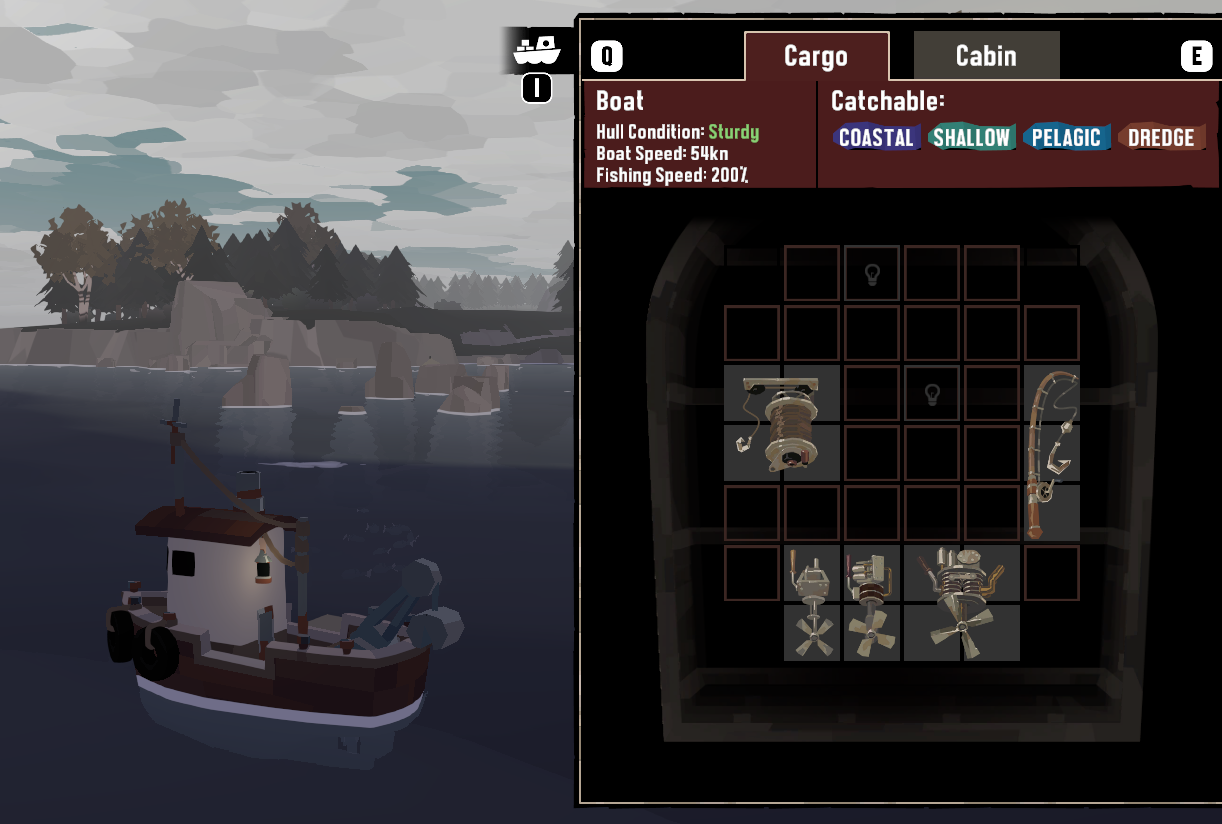 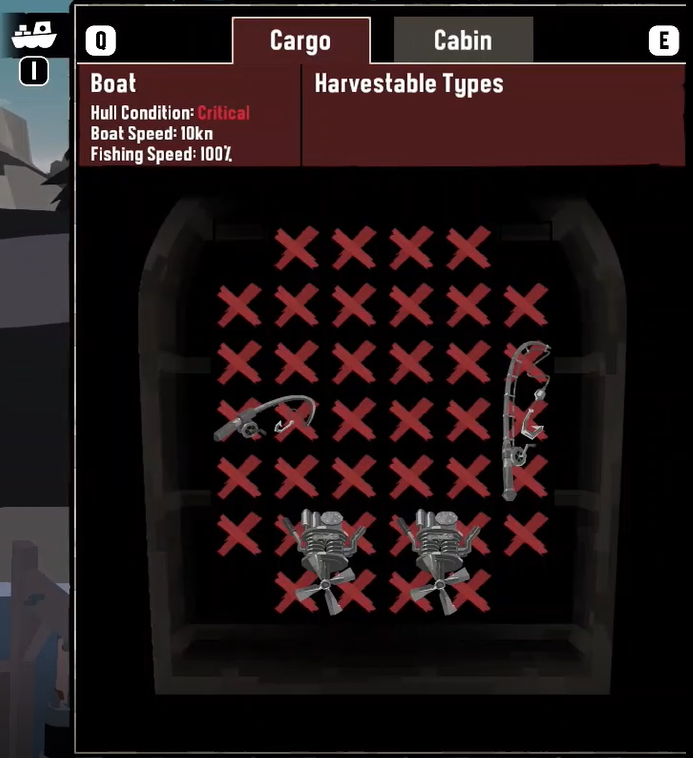 Just as you can lose items from your hull if you take damage, you can also disable your fishing and boat equipment if you take damage. You’ll need to repair at a shipyard before gaining full use of the items again.

Players will sink long before reaching this amount of damage though!

No such thing as a free meal, even when you’re the one providing it. Players will start with a debt to the fishing village of Greater Marrow, wages from your fish will be garnished until you repay the debt, but helping the town will help yourself as it unlocks access to better upgrades for yourself and your boat.

Players now have spaces on their boat where they can install lights that will help with visibility during the fog-ridden night of The Marrows. Purchase your lights from The Shipwright at Greater Marrow.

Time passes while you fish

Previously time would only pass as you were moving on the water or if you were resting at a dock, now time will pass while you’re fishing as well.

“Undock” action at all destinations

We decided to add this alternative form of leaving a destination. From playtests we see players now use this more often than the “Undock” action button that’s also available so made it easier for our players to perform the action they want. Nice!

“Back” action should complete dialogue

As with the above this is just an alternative way players can perform the actions they want to take. Dialog will now auto-complete and transition when a few of the main action buttons are pressed.

Things were getting a little boring with our three fish, so we went and added more! Players can now fish for three types of fish (Coastal, Shallow and Pelagic) if they have the right rods and find Cod, Flounder, Stingray and the rare and elusive Sailfish along with the Mackerel, Eels and Bronze-Whalers we already had ingame. Each fish has a different shape and is worth different amounts to the fishmonger. More fish are coming soon!

Where we had originally placed this action prompt seemed to get missed by our playtesters, since we had cleared up some space from the tooltip action prompt with moving and consolidating other action prompts we moved this one to the tooltip where players notice it. 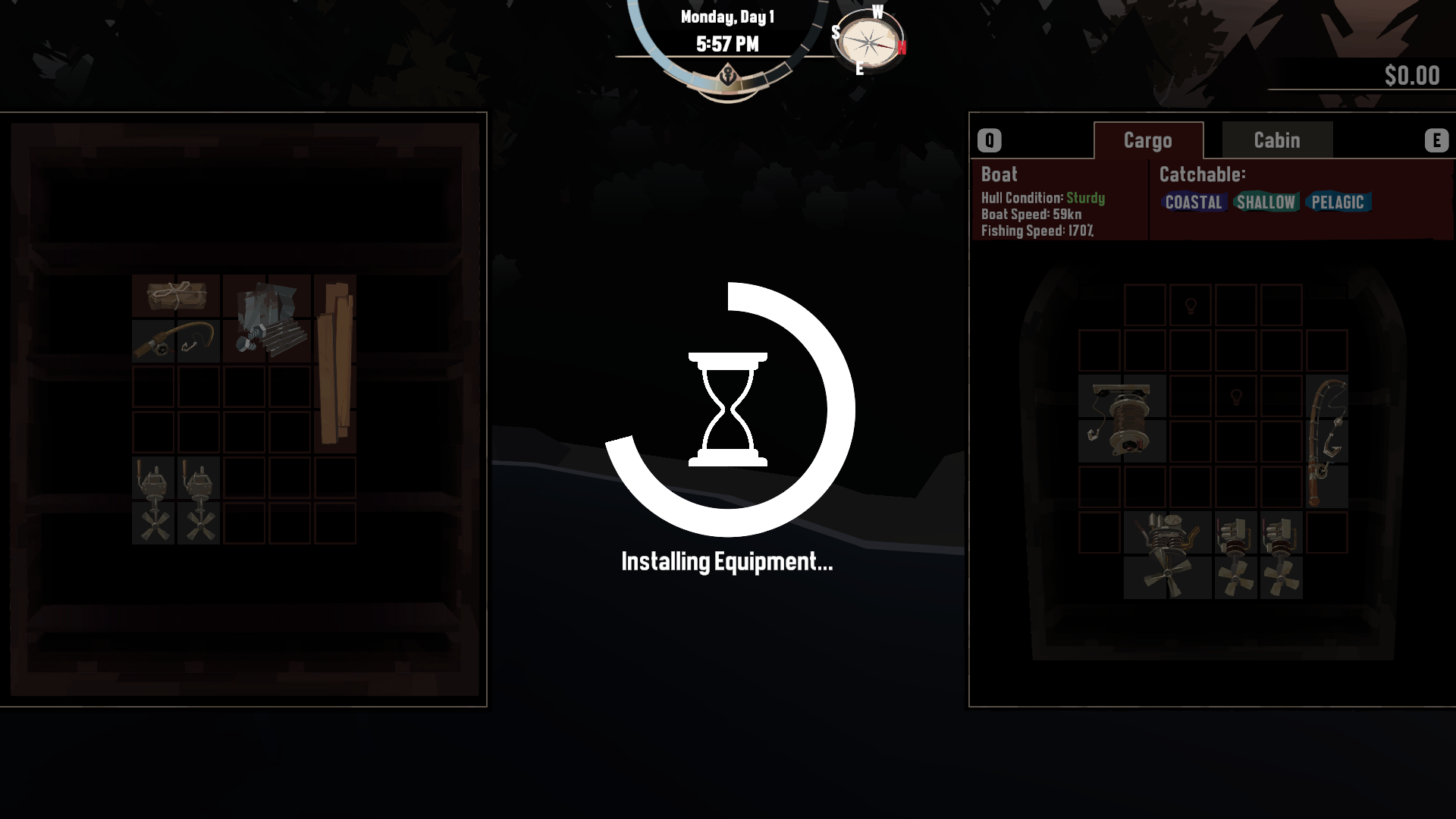 From playtests our players didn’t seem to notice that it took time to install equipment in their boats, during which time a player can’t take any action. We observed our playtesters trying to press buttons during the install time and it looked like a bug when the game didn’t respond. We added a strong vignette over the screen with a timer so players couldn’t help but see what was happening. Since we added the screen no playtesters have tried to perform an action while something is being installed. Success!

Now that we have most of the pieces in place for the start of our game we needed to go in and pace it properly. We are aiming to refine that first 45 minutes or so of gameplay. Initial feedback from playtesters is positive on how the pacing feels, but we’ve overshot our target and that first 45 minutes takes on average about 75 minutes, we’ll want to tighten that up in our next balancing pass.

Fish Stickers – a fun graphical error that saw you placing fish in your inventory that would persist on the game screen even once your inventory was closed!