This sprint we built added detail into our core loop such as introducing different equipment and the ability to take damage (and repair it). On the art side of things we introduced our first production boat model and played with its buoyancy on the water as well as painted our first character; The Fishmonger.

Our games namesake is now an action within the game! Dredging spots don’t respawn like fishing spots, and the items you Dredge up might not behave as other items do either.

We now have the model you’ll start Dredge with! Fish also have a type and you need a fishing rod that can handle that type. Engine speed is now a feature!

Our first character, The Fishmonger of Greater Marrow makes an appearance! 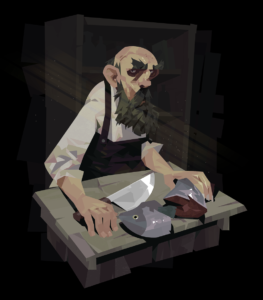 And bug of the sprint goes to: